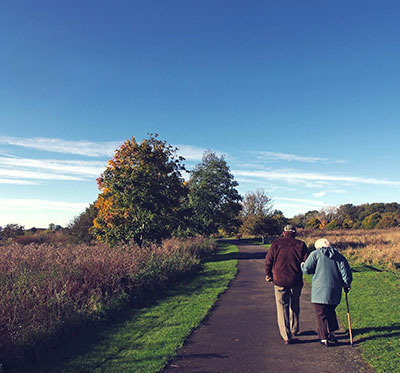 We’ve had many wonderful clients over the years but Don and Anna (not their real names) really worked their way into our hearts.

During his career as a Marine Corps officer, Don, his wife Anna and their children lived all over the world. When the time came, Don and Anna retired in Annapolis largely because their children had settled there. They built a beautiful house and enjoyed it for nearly 10 years, entertaining family, friends and the Midshipmen they sponsored.

Then, Don began to realize Anna was having memory issues. The couple consulted with their doctor and other medical professionals, and sadly, Anna was diagnosed with aggressive memory decline.

Don felt strongly about caring for Anna himself, keeping her in the home they had built together as long as possible.  For a time, Don kept the house running smoothly and cared for Anna but realized he would need help as her disease progressed.  When a new senior community opened in Annapolis that meet their needs, Don signed up for a residence.

By this time, Don and Anna had been married for almost 60 years and had a lifetime’s worth of belongings in their large retirement home. The couple’s adult children lived nearby but their own responsibilities meant they were not able to help with downsizing and moving. Don called Chesapeake Transitions to manage all aspects of the process so he could continue to care for Anna.

With Don’s guidance, Chesapeake Transitions went through the couple’s large home to identify what needed to be kept, gifted or donated.  Seeing a plane propeller in the basement, Don explained it was from one of his tours in Vietnam. In the kitchen was a large bulletin board that Don called “Anna’s Memory Board” with photos, and other mementos of their life together.

Through the downsizing and moving process, Don anticipated Anna’s confusion, addressing it in a kind and loving way. He impressed everyone involved by never uttering a cross word or showing a sign of stress as he cared for his love of 60 years. While he didn’t do the physical work, Don was critical in making the transition smooth for his wife and seemed honored to do it.

Once the couple’s furnishings were set up in their new home, Anna seemed reassured surrounded by familiar belongings.  She saw the “Anna’s Memory Board’ hanging in the new kitchen and identified every item. Don was stunned and pleased to find we had hung the plane propeller on his office wall.

Since the move, Don has begun battling his own terminal disease. Don’s decision to move his wife into a caring and well-equipped environment now seems that much more loving and thoughtful.  Don and Anna’s story is not over, but all involved know that when the time comes, the other partner will be well cared for until they meet again.

As you begin to consider relocating to a new home, so many possibilities, opportunities and adventures come to mind.  You are looking forward to…

Relocating to a smaller home means letting go of possessions—you simply will not have the space. Items like an old lawn mower or 20-year-old tax…